When I was a teenager, I experienced severe acne on my chest for a number of years, which seemed to go away on its own. However, in my mid twenties, it came back in force, and appeared at the top of my neck (under my chin area), chest and upper back with sore cyst like breakouts. I spent about two years doing different cleanses, protocols with naturopaths, avoiding different food groups, facials you name it ($$$!!!). A friend of mine put me onto Jenny after she sent her daughter to her, for some period problems she was having.

My cycle was also out of balance – short cycles and painful PMS; all the reading I had done had told me this was not normal, so I thought that if I could hit ‘two birds with one stone’ then that would be ideal! And we did. I saw Jenny for a period of about four to six months, stopping because I was leaving the country. During that time, my chest and neck completely cleared up, my cycle was sitting at 28 days, and my PMS symptoms had greatly reduced. Jenny also had some great wisdom to share with me around cycle health.

I know it all sounds a bit too good to be true, but combined with a healthy lifestyle, my experience with Jenny’s acupuncture treatment totally turned everything around. If I could send every woman in my life to see Jenny for hormonal issues (whether it is acne, PMS, cycle length, or fertility) I would.

Maxine K, Westmere (* Results are varied from person to person)

I came to see Jenny about my acne. I had hormonal acne since my fertility returned after having my daughter. Seeing Jenny was my last attempt to fix it naturally before using antibiotics.
The treatment it’s self was very relaxing and painless. Like most acne treatments it has to get worse before it gets better which you can see in the photos but now after 3 months of treatment my skin is heaps clearer than it was! There’s still a little residual scarring that you can see in the photos but overall I’m not getting breakouts any more and the scarring is a million times easier to cover with make up! I’m sure within a few months the scarring will fade too and I’ll be back to having awesome skin again like I did before getting pregnant. 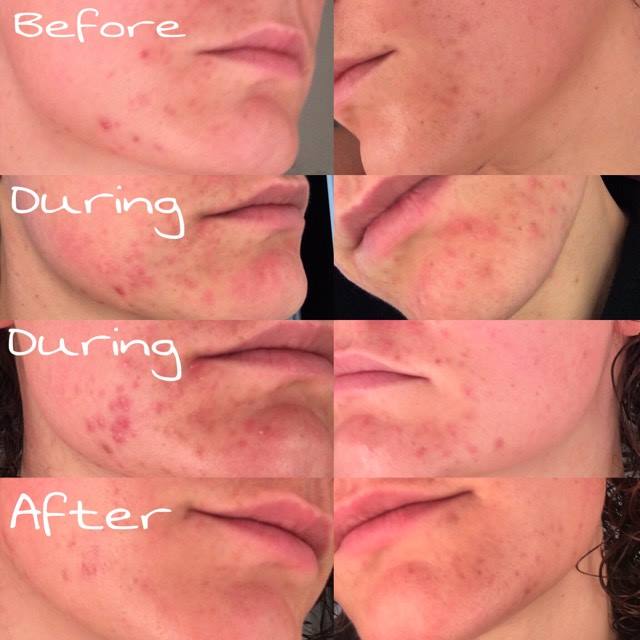 Danella K, Titirangi (* Results are varied from person to person)

I chose to see Jenny for a very common problem, acne. Each day, my self-confidence has (and still does) depended on how good my skin was looking. Since it began, I have avoided and refused to have photos taken of me because of feeling so terrible about myself. My doctor handed me many different contraceptives and antibiotics, and I willingly took them for years with the hope that my skin would get better but it didn’t.

It’s important to note that Jenny was the third acupuncturist I visited. It took a while to find someone who was actually capable of making a difference, but now I won’t see anyone else. Not only has my skin improved one thousand fold within the last four months of seeing her, but she has helped stabilised my menstrual cycle, stress, and she is now working on my tinnitus (constant ringing in the ears).

To say she is incredible is an understatement. For Jenny, my issue is only minor. I hear stories of how she helped other patients with much more important problems, such as a woman who struggled with fertility for years, had gone on to become pregnant after only a few sessions with Jenny. I really can’t express my gratitude enough for helping to return to me my confidence. Though we are still in the process, I can actually see and feel the difference her work has made (and so quickly!).

Ellen M, Whangaparoa (* Results are varied from person to person)